Universalists and the Denial of the Gods

One of the biggest splits in modern day Norse/Germanic Heathenism (I am using that term as a catch-all as there are so many to describe Europe’s native religions) is between Folkish and Universalist practice. I do realize that I am somewhat preaching to a choir here as I am Folkish and this article is being published on a Folkish website, but I want to take some time to explain my belief system and to explain the Universalist belief system. I will be making some sweeping generalizations due to Heathens not adhering to dogma as in there is no true “right” way to practice.

Folkish Heathenism is akin to many Native folkish religions. Just as most American Indian tribes state that one must be a member of their nation, or have direct blood ties to the nation, in order to be included in their rituals and worship; Folkish Heathens state that one must have European blood in order to be included in theirs. The varying degrees are dictated by each Kindred or Tribe, as are geographical boundaries regarding ancestry. Some Kindreds are specific to a certain region such as Scandinavia, or western Russia, some are more specific such as Germanic Folkish Kindreds, while others allow more latitude in acceptance but still restrict membership to European ancestry.

Universalist Heathenism is akin to Abrahamic religions in that all and sundry are welcome regardless of blood or ancestry. There is no tie to the regions in which Heathenism first germinated and those whose ancestors had never set foot in the ancestral home of Heathenism are welcome to join in blot and sumbel.

I am quite sure many will take exception to my generalizations, however I wished to keep the “definition” as broad as possible for a specific reason which will become clear in the next few paragraphs.

I’d like to take some time to relate why I am Folkish, and why Folkish Heathenism is not, despite the protestations of the Universalists, racist.

I served in Iraq working for both the Department of Defense and Department of State. When one works in such an environment, bonds are formed that in many cases are tighter than that of blood family. One of those people I will call “Charlie”. Charlie was a black guy- born & raised in Tuscaloosa Alabama.

Charlie became interested in my religion through, for lack of a better term, popular culture. Heathenism has a strong warrior aspect to it, and as a result will naturally attract Warfighters. He began asking questions about my faith, and I answered them as honestly as I could (I am no Gothi but was a solo practitioner at the time). I wore at the time a commercially made Mjolnir and Charlie asked where I got it as he would like one.

I told him that Heathenism wasn’t really for him as it was (in my belief) a religion for those of European ancestry.

His response was “Dude- that’s racist as fuck” (direct quote).

I replied with an anecdote: If he was walking along a road and saw two people starving and in need of help, and he only had the resources to save one, and of the two people one was his cousin, which one would he feed?

He answered that he would feed his cousin.

You know that moment when you are explaining something to someone and you can actually SEE that moment of dawning comprehension wash over someone? I saw it then and there. It clicked in his head that I was not being racist but making sense.

I then asked him if he knew where his family was from. While he was not able to nail down a specific modern country, he gave two West African nations as probable locations where his ancestors were sold and transported to the New World from. I explained that he had Gods his ancestors had known, Gods of warfare, wisdom and justice as well as Goddesses of fertility, beauty and sexuality. I told him what I knew of Yoruba and told him that the blood of his Gods ran in his veins. 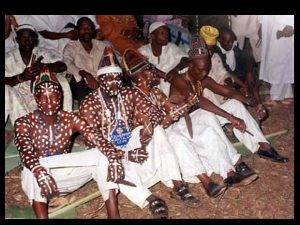 He now practices an extremely Folkish native African religion, one which his ancestors practiced before mankind could record their thoughts in writing. His Gods now know him, know who he is and more importantly what kind of man he is, and he has prospered.

Now I do not claim to speak for the Gods. They can, and do, call whomever they so choose to call. It is not my place to make that determination. The Gods very well may call those of other races, for whatever reasons they deem fit. They are the Gods after all and do what they will. My delineation is that I wish to worship with others who share my ancestry through voluntary association. I prefer ancestor veneration to play a major part in my rituals as well as the cultural ties to Europe where my Gods were worshipped. An “outsider” cannot bring that to the table.

Universalists, in my opinion, do the worst disservice to people not of European heritage by being “all inclusive”. If I was a Universalist then Charlie, my brother from another mother, would not have looked any further in his path away from Christianity. He could have worn a Mjolnir, participated in blot and sumbel, made offerings to Tyr, Thor and Odin, and become a practitioner of Heathenry. He never would have learned about the Gods of his people. He would not have searched deeper into West African native religion. He would not have made the connection to the Gods whose blood he himself carries. He would not have made the spiritual connection between himself and his homeland, the red soil of Africa that gave rise to his people.

Universalists deny people from other areas of the world the connections to their own Gods. Whether it is someone of Kurdish heritage ignoring Tawuse Melek in favor of Odin, someone of Cherokee heritage making offerings to Thor instead of the Little People, or Charlie venerating Tyr instead of Shango.

While I did say earlier that I do not deign to speak for the Gods, and that they will call whoever they will, they are above all logical beings. They may be impetuous, headstrong, and at times reckless, there is an underlying sense of intelligence even when things go wrong for them. It is for this reason I believe that they call to those whose blood is shared with them before they would call to an outsider. Conversely, the Gods of the Greeks, Romans, the many African nations, the nations of South and Central America, the Gods of every culture around the world would seem to want to call upon their own as well. When we muster an Army for our defense, do we look to Zimbabwe to fill our ranks, or do we call upon our own sons & daughters to carry our flag forward?

By allowing those not of our blood to take up the hammer and call themselves Heathen, are we not letting the voices of mankind drown out the voices of the Gods? Are we not letting our own Abrahamic influenced dogma of inclusiveness overshadow ties of blood itself? Our religion sprang from the harsh environment of northern Europe while Charlie’s sprang from the lush tropical paradise of western Africa. Our Gods know sacrifice and hard times from Odin giving an eye to Tyr offering his hand. His Gods are Gods of plenty and fertility. His Gods would not KNOW me, just as I believe my Gods would not know him… and to me encouraging someone to abandon those who know him for the company of strangers is one of the worst things one man can do to another.

I call Charlie “brother” and I mean it. Our bonds were formed in combat, as other friends were carried from the field in pieces. We survived 7 years of fighting, from the open desert to trying to make it from one side of Tikrit to the other alive. I told him my religion was not for him BECAUSE he was my brother, not in spite of it; and one of my proudest accomplishments as a man was to set his feet on the path that was first blazed by his ancestors in prehistory.

That is how it should be in my opinion.