Freyja – The lady of Fólkvangr

The blossoming Germanic woman is a duality of energy. In joyful times she is beautiful and
radiant, a blend of kindness, innocence, and a warm spirit that others simply marvel at. At other
times, however, she is defensive to the point of aggression over who and what she cares for.
The sweet countenance gives way to a stern disposition, and responsibilities are taken with duty
and dignity. This is the glory of Germanic maidens, and Freyja is their avatar.

Freyja and her twin brother Freyr were yet born during the events of the First War. Her father
and mother Njörd and Nerthus were among the victorious Vanir tribe, and to Asgard They went
as hostages. Raised in Asgard, sweet young Freyja became hailed as a prized beauty and the
Jötnar were especially forward with their attempts to wed Her. A great builder traveled from
Jotunheim to Valhalla and offered to construct a citadel to defend Asgard – if he could have
Freyja’s hand as payment. The Gods convened and agreed to his proposal on the condition that
the citadel be built in a single winter, with no aid from others. The Jotunn argued that he should
be allowed his great stallion Svadilfari to aid him. They nearly accomplished the incredible feat,
but the distraction of Loki in the guise of a mare broke the pace and the completion fell behind a
single day too late. When the builder flew into a rage, the Gods called on Thor to settle the
matter, and Freyja’s mighty friend came in earnest to defend Her. 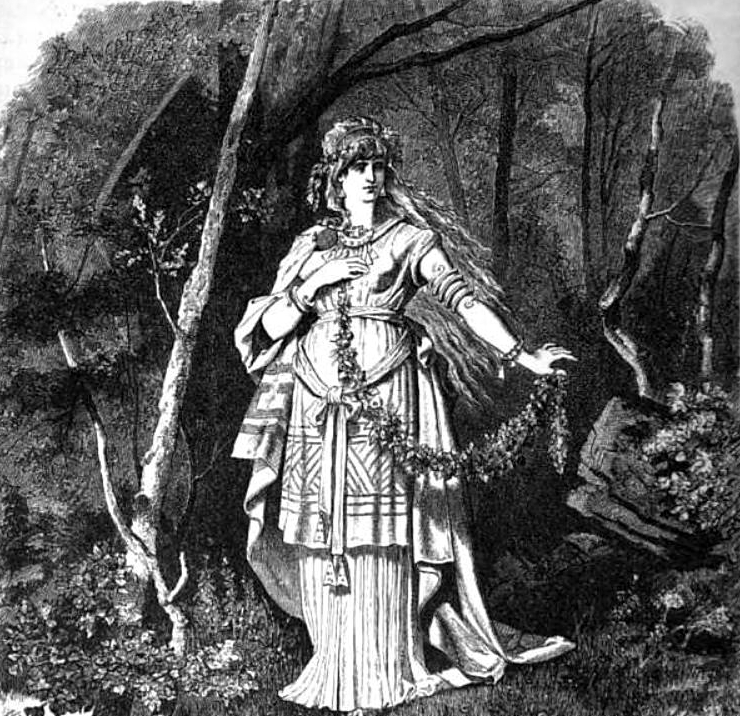 Having formed close bonds with the Asa, Freyja is who first instructed them with Seiđr (the
powerful feminine form of sorcery); however, She never abandoned her Vana customs. As with
many of Her tribe She was far from shy with humanity, taking the high-born Óttar as a servant.
When Óttar became threatened with the loss of his birthright and inheritance, Freyja urged the
Völva Hyndla to accompany Her to Valhalla to ask Ođin for aid. It is likely in such days that
Freyja first blessed the fields of farmers and taught their wives and daughters Seiđr, whose
descendants stayed true to Her long after the Christening of Germanic kings. There are also
several indications Freyja was more rebellious with Her intimacy than what was permitted
outside Vanaheim; Hyndla and Loki alike accuse Her of having many bed partners including Her
brother, and Her father Njörd distinctly fails to deny the accusation during His defense at Aegir’s
feast.

It is to the God Ođr that Freyja would eventually wed, though Her affluence and His large
absence in the lore suggests She was the dominant spouse. Her daughters, Hnoss and
Gersemi, were born in quick succession and are also known for Their beauty and desire. The
home of Freyja is the tall, beautiful hall of Sessrumnir, about which are Her meadowlands
named Folkvangr. It is there that She gathers the best of the best of the heroic dead, enjoying
the right of first pick over Ođin. The origins of this peculiar arrangement are unknown, but
considering that it is She who keeps the very finest, and noting the total absence of Vanaheim
from the prophecy of Ragnarok, one might believe that Her host manages to defend the Land of
the Vana from the doom destined to Midgard and Asgard alike.

In this age of revival, Freyja is universally viewed for Her gentle feminine qualities. Depictions of
Freyja are usually of a fair maiden with long, flowing hair and Her two cats have even become
popular symbols in the faith. She is offered to in Blötar (rituals of sacrifice) for good harvests

and a prosperous year. Yet for all Her kindly qualities, She bears the great burden of hosting the
finest Germanic warriors ever born. With the foretold prophecy of the death of Her brother
during the Damning of the Gods, it is Freyja who will be left to take up the mantle of the Vana
tribe. While the bravest may dream of dining with Ođin, they would also do well to remember the
Lady of the Slain.