Thor – Champion of the Aesir

It is during the most violent storms that Asatruar are reminded of the Gods. In the pouring rain
the faithful watch the dark sky pierced by the most powerful, singular bolts of lightning and dare
to believe in their souls that just maybe they have seen the Mjölnir-hammer, wondering who or
what has incurred the wrath of Thor.

The irony is, Thor is the protector of Midgard, not the destroyer, and who better? Ođin’s son,
born of the Giantess Jörd, is indisputably the strongest of all men and Gods alike, the mightiest
Aesir. Thor is first warm and welcoming before His anger is provoked. It is He who keeps peace
and order wherever He travels, and He who safeguards the Germanic world from the chaos and
destruction of the Jötnar (plural form of Jotunn, the Giants). 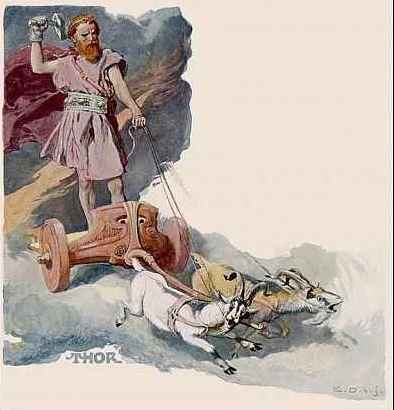 One could question if the mighty God was yet born during the First War, when the Aesir had no
champion and were nearly overrun by the Vanir. He was also likely quite young in the Age when
the Jötnar were prosperous and yet dominant. The mischievous Loki, in his malice, once cut all
the hair from the Goddess Sif’s head. Thor was enraged at the embarrassment of His wife and
took hold of Loki, threatening to break every bone in his body. The trickster saved himself by
promising Sif hair of gold; and for this Thor allowed him to travel to Svartalfheim to acquire
these treasures. Loki returned with the dwarf, three gifts in hand and an extra gift for each God
apiece. Thor’s extra prize was the hammer Mjölnir that could smite whatever it struck, no
matter the object, and would always return to Thor’s hand should He throw it, and never miss.
Loki thus lost a wager with the dwarves and had promised his head, but refusing to honor the
wager was held down by Thor and had his mouth temporarily stitched shut.

The young Thor’s distaste for the Jötnar would only grow when, one morning, He found His
hammer missing and could not find it no matter where He looked. As Loki was the one who had
the legendary weapon commissioned He turned to him for aid, and together they traveled to
Folkvangr to ask Freyja for help. She leant Loki a feather dress so he could travel at incredible
speeds to Jotunnheim where he confronted the mighty Thrym. Thrym admitted to stealing Thor’s
hammer and said he would only return it if Freyja would agree to marry him. When Loki returned
and told Freyja of Thrym’s request She snorted and refused to be a part of any scheme.

Thor and Loki then called all the Gods and Goddesses to counsel as to how He might regain
His hammer, and Heimdall the White was eager to provide a humorous solution: Thor Himself
should wear the bridal veil and a long wedding dress with a jewelled necklace and a woman’s
hat. Of course Ođin’s son objected, but Loki pointed out that Asgard itself might be overrun if
Thor cannot guard it with Mjölnir, so, the Gods quickly dressed Thor in the most expensive
woman’s bridal garb imaginable and Loki whisked Him off to Jotunnheim. Thrym had the most
exorbitant wedding prepared for the two of them, and to hallow the wedding the Jotunn had
Mjölnir brought and placed on Thor’s lap… a very critical mistake.
The affair with Thrym demonstrated once and for all the threat the Jötnar posed to Gods and
humans alike, and ever after was He sought as a champion. When the huge Jotunn Hrungnir

grew drunk and belligerent in Valhalla, Thor shattered his stone head. In Midgard on the island
of Hlesey Thor struck down a wicked brood of women who disregarded hospitality and attacked
travelers. When Thor returned to His great hall Bilskirnir and learned His daughter Thruđ had
been pledged to a dwarf named Alviss, He used the strength of His mind to trick the dwarf into
facing sunlight and turning to stone. It was Thor alone that Loki so feared as to end his insults at
the feast of the Jotunn Aegir, just prior to his binding until Ragnarok.

The Germanic people too knew that Thor above all would protect them. The icon of Thor sat
most high among Ođin and Freyr in the great Temple of Uppsala in present-day Sweden.
Wealthy men had various depictions of He and His hammer carved on Runestones and other
works of art. When Christianity arrived in Germania and began forcibly converting the people,
the symbol they used to rebel with was the Mjölnir-hammer, and to this day, it is the weapon of
Thor that hallows the holy groves of the Heathenfolk.