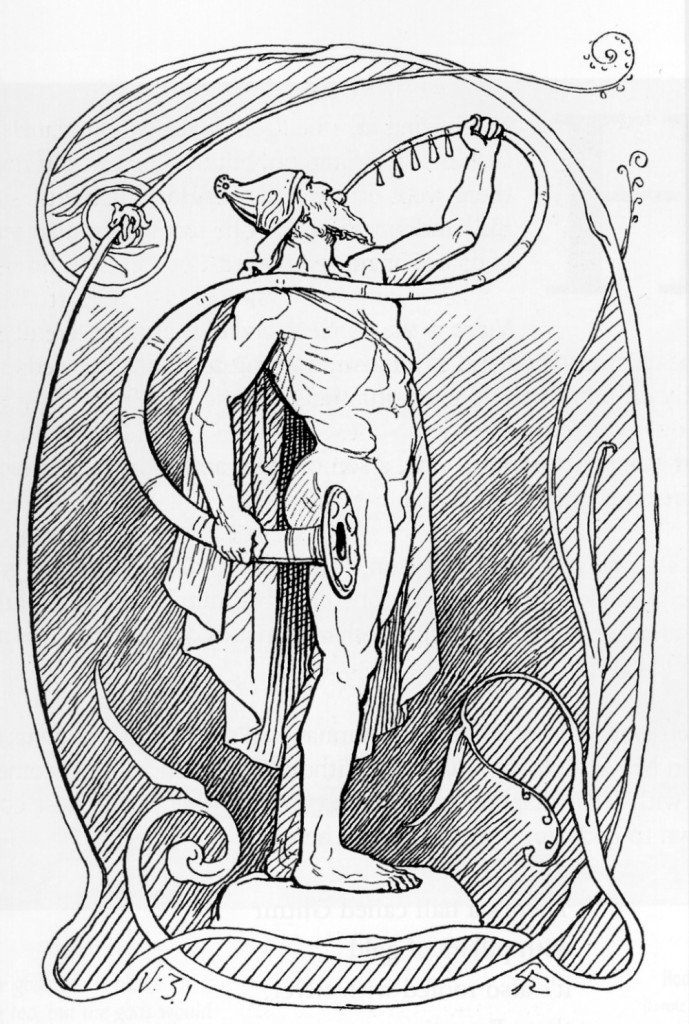 There are those who appreciate order, to the degree in which it allows them to go about their
lives without constant unpleasant surprises. Then there are those who believe in order, who
devote themselves to the maintenance of social structure and who live to uphold traditions and
proven systems of society; and then there is He who brought order to the Germanic world in the
first place. Heimdall is His name, and not only did He create the order of the Northmen, it is He
who ever watches in anticipation of its total destruction.

Of all the Gods, Heimdall’s birth may be the most peculiar. When the world was still so young
after Ođin, Vili, and Ve created it, nine giantesses convened at the very edge. Pooling their
magics and using the earth, ice-cold sea water, and the blood of boars the nine Jötnar sisters
brought Heimdall into existence. Their son grew to be incredibly mighty, yet also so fair as to be
known as “the White.” Bearing teeth of gold, His sight and sound were sharper than most and
like Frigga, Heimdall bore the gift of Foresight. The nine mothers even taught their progeny
Runecraft, and Heimdall developed to a masterful degree. Perhaps there, at the very fringe of
Midgard, the giantesses meant to raise a champion for Jotunheim to avenge the death of the
primordial Ymir.

Yet chaos and division would not prove to be in Heimdall’s nature. Taking to the northern shore,
He came to three different households – one by an elderly couple, another by a middle aged
family, and the last by a young one. As each gave the best hospitality they could, He blessed
their marriages with conception, and in turn, the three sons born greatly multiplied themselves.
Because their qualities and capabilities were distinctly separate from one another, there formed
the first castes of the Germanic people – Thralls, Laborers, and Warriors. In giving the early
Germanics social order, He did not oppose the creation of the Sons of Bor – He fulfilled it.

At some point Heimdall found favor with Ođin and assimilated into the Asa tribe of Gods.
Trusted to Heimdall is the most sacred duty: ever-watching for the coming of Ragnarok, where
upon the first sign He will gather His great Gjallarhorn and blast so loudly as to be heard across
all Nine Worlds. Yet He is not banished to his post, but otherwise dwells in Asgard amongst the
other Gods. It is He who humorously suggested dressing Thor like a bride to fool Thrym. We are
also instructed that Heimdall attended the funeral procession of Baldur astride His horse
Gulltoppr. The White was also present at the Feast of Aegir where Loki sought to rile Him by
suggesting His post as watcher was a curse rather than a great honor.

His hall Himinbjorg sits where the Bifrost Bridge meets Asgard, the perfect vantage point to see
across Yggdrasil. There Heimdall enjoys fine mead at His post; but never think The White is
slacking or negligent in His duties. When Thor is likely away or otherwise indisposed, it is
Heimdall who fights back wayward Jotun that mean to seek their fortunes in Asgard, and it is the
Son of Nine Mothers who, after heralding Ragnarok, will do battle with Loki, the one so
responsible for much of its pain.