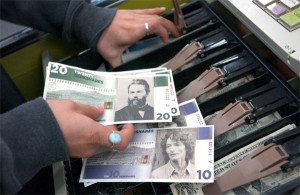 Recently, while pondering the impact the imminent crash of the US financial system will have on any intentional community we would create, I stumbled upon several articles that deal with “local currencies” and I was intrigued.

The most successful of these “local currency” strategies is centered around Berkshire county in western Massachusetts but now several other towns across the US are also dumping dollars in favor of a currency they produce (and control) locally.  Local groups in California, Kansas, Michigan, New York, Oregon, Pennsylvania, Vermont and Wisconsin run similar local currencies. One of the oldest is Ithaca Hours, which went into circulation in 1991 in Ithaca, New York.

From the Berkshire Eagle:

“Since Sept. 29, more than 225 South Berkshire businesses have agreed to accept ‘BerkShares’ from customers in place of federal dollars.

The project is part of an effort launched by the E.F. Schumacher Society and the Southern Berkshire Chamber of Commerce to get people away from shopping on the Internet and back to shopping on Main Street.

The BerkShares are good only in stores that accept them and in banks that redeem. Chain and Internet stores don’t accept them.

The benefit to local merchants is more customers. The benefit to customers is the face-to-face contact and the personal service that builds a sense of community, said Susan Witt, director of the Schumacher Society.

BerkShare users aren’t so much saving money as supporting the local economy and strengthening the community, Witt said.”

Considering the fact that in 2011 there will be 43 US states that are bankrupt (California is in such dire straits that they will begin turning thousands of prisoners loose this year, Arizona and New York are considering it too) such a “local currency” might be just what the doctor ordered.

Of course, “the sky is falling and we have a bunker!” is not their selling point, but it surely is a built-in benefit. Even though the “local currency” is basically a Disney dollar backed by counterfeit Federal Reserve notes, their intrinsic backing is in the faith that their community has in it’s local business. That faith will remain intact even after 40 trillion US dollars won’t buy bread in the next few years.

It’s something to consider and monitor as our community grows.