Since 2013, the Irminfolk Odinist Community has operated a metal-based community currency program called the Futhmark. Consisting of our own minted copper, silver and gold coins, our goal with this project is to develop a popular, sustainable, and stable complimentary economy for the heathen community.  While encouraging trade within our community rather with than strangers and far-flung corporate enterprises, we build stronger bonds with our folk through a commodity based system of wealth.

The name Futhmark is a cognate of the FUTHARK rune alphabet used to write various Germanic languages from the second to the eleventh century AD, and the Mark unit of account named for the common unit of weight used to measure precious metals such as gold and silver in medieval Europe.

With this combination of the centuries old tradition of calling money systems “Marks” and the ancient wisdom delivered by the Gods and passed down by our Ancestors in form of the Futhark Rune system, we came up with a timeless, catchy and memorable name to differentiate our community currency as a distinctively heathen hoard of wealth. The Futhmark promotes the essence of Heathenry explicitly and implicitly. As a community currency, it embodies the virtue of self-reliance. As a keepsake, they are a talisman struck with symbols of our ancestral faith in the Aesir and the Vanir. And the Futhmark is pure in constitution; wholly from the Earth; made of Pure Copper, Pure Silver, And Pure Gold. 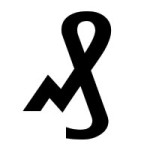 The Futhmark even has a distinctive currency symbol. The Futhmark’s “dollar sign” is this: ₰; and it is borrowed from the defunct “German Penny” sign. It is a symbol representing the letter ‘d’  for ‘denarius’ and it is written in a cursive script called Kurrentschrift, based on late medieval German cursive writing. The symbol is encoded in Unicode at U+20B0.

For fractions of Futhmarks, like halves, quarters, and dimes, we decided to name them “Pfennig”, borrowing once again from middle German currency nomenclature. The Futhmark currency system does the opposite of what globalist central banks do though. While our higher denominations are copper and silver coins, we chose to print the small denomination fractions on paper. A penny worth of silver would be infinitesimally small, and cost 80x that to make! When trying to create a community currency with intrinsic value, it make much more sense to do it our way. A US quarter has more intrinsic (especially the pre-1965 ones made of silver) value than a US $50 bill. Not so with the Futhmark!

The Silver (and Copper) Standard

The Futhmark standard, which sets the face value of its silver and copper coins, is based on other formulas and standards in common use by other metal-based alternative currency programs. Common and familiar weight and purity specifications ensures compatibility, versatility, and increased opportunities for fair and even trade among peers.

Futhmarks have a face value which is permanently tied to a specific weight of pure precious metals:

Futhmarks are a United States based community currency and work in parallel to official legal tender (U.S. dollars). Thus, the exchange rate between Futhmarks and U.S. dollars is 1:1 wherever Futhmarks are voluntarily accepted. This one-for-one exchange rate with USD will remain in place until either the purchasing power of the U.S. dollar declines, or the cost of precious metals rises to the point that Futhmarks are intrinsically worth more than their face value, then a new exchange relationship will be decided and published.

If you are in a foreign country where complimentary and alternative currencies are legal to use, then your nation’s currency is worth its equivalent of US Dollars in Futhmarks.

Because alternative curencies are not protected by counterfeit laws, all Futhmarks must bear the Trademark of the Irminfolk Odinist Community, providing a solid legal foundation to protect the Futhmark from fraud.

The Futhmark program will have a broad range of commonly used denominations to facilitate transactions in as wide a range of exchanges as can be anticipated. Currently, there are ₰13,000.00 in circulation.

The 1,000FM coin. One Half Troy Ounce of .9999 Fine Gold (Only prototypes minted, no production needed in circulation yet.) 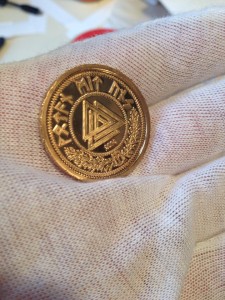 The 1FM coin. One Half AV. Ounce of .999 Fine Copper Replaced with Polymer notes with a reserve of metal ₰ coins segregated to back the notes.

The 5FM paper note, printed on bonded polymer paper and featuring the image of Freya. 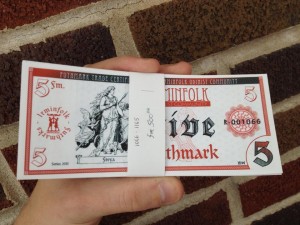 The 1FM paper note, Printed on Bonded polymer paper and featuring the Image of Odin. 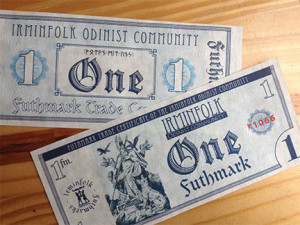 Each time you use a Futhmark, you are helping to increase the local community/ kindred / tribe’s  circulation of goods and services. When a customer spends a Futhmark with a merchant, it moves from hand-to-hand allows for someone else to spend that Futhmark again somewhere else, distributing Futhmarks as a means of exchange.  In a resilient local economy, that Futhmark could be spent many times locally, maintaining and growing the wealth in that community. In the greater national economy, most of our dollars flow out and away from our communities as soon as they are used, enriching national and multinational companies far away from where the money is spent. But a community currency is inherently limited to a particular place or group, so it incentives people to shop at locally-owned businesses and keeps wealth flowing within the community. This is called the multiplier effect.

The Futhmark denomination formula provides a consistent value to commodities used as a means of exchange; specifically Gold, silver, and Copper. However, any time you tie a currency with a commodity, you run the risk of your commodity value exceeding that of your currency. When the commodity value exceeds the face value of your currency, the currency is rendered “useless”. (See Gresham’s law) After all, no one would spend a five-dollar silver piece when the silver it is made from is “worth” six. The reason we call money “currency” is because of its need to flow, like water current, through a community in order to remain solvent. Water always flows toward the path of least resistance, distributing itself downward. The Futhmark must therefore have an intrinsic value lower than its face value in order to provide the “gravity” that keeps the “current” flowing. An example of this can be seen in the Silver Dimes and Quarters being removed from circulation in the 1960s, and the removal of copper from pennies in the early 1980s. The commodity value of these coins far exceeds the “current” value of them today, and so they no longer circulate; they are hoarded and melted down for their metal. They are useless as money if it is not worthwhile to spend them.   The Futhmark Face Value also allows for seamless financial record-keeping for a business owner who accepts Federal Reserve Notes and Futhmarks as payment for goods and services. When a merchant accepts a 50FM silver coin as payment, he is providing the customer with $50.00 worth of product in today’s pricing. Record-keeping is accomplished in exactly the same manner that Gift Certificate transactions are recorded. The Futhmark Face value makes the transaction convenient for the buyer and seller. Bartering commodities like copper and junk silver by researching the current spot price, and multiplying it by the alloy content to find a calculated value at that moment is impractical to most businesses. It is time-consuming, and prone to mistakes and dishonesty. The Futhmark face value brings stability to the currency by allowing people to accurately predict their expenditures and create budgets. If in one week spot silver prices are high, then it would be a good opportunity to purchase things with scrap silver, but if there is a substantial drop in the spot price, then he will have to exchange substantially more silver for the exact same purchases. If that person were receiving a specific amount of silver each week, as pay, he would have no way to predict how much purchasing power he would have from one moment to the next. A face value levels the playing field. The Futhmark face Value is consistent with the formulas of many other Alternative Currency markets which provides an overall stabilizing effect on the concept of metal based alternative currencies, as well as allowing for even and seamless exchange with other local economies. This helps in minimizing the risk of economic isolation.

Each Futhmark carries with it ensured quality. Futhmarks must be made of investment grade metals in the weight and purity specified while also bearing visually appealing symbols of Germanic Heathenry. Delivering on this commitment required us to work with only the most reputable and experienced minting and engraving facilities, and to contract with some of the best sculptors and concept artists in the industry. The Futhmark promotes the essence of Germanic Neopaganism explicitly, and implicitly. As a local community currency, it embodies the virtue of self-reliance. They are a talisman of the faith of our ancestors, struck with symbols and motifs of our faith in the Aesir and the Vanir. And the Futhmark is from the Earth; made of Pure Copper, Pure Silver, And Pure Gold.

Low minting numbers ensure the collectivity of the various Futhmark designs. Each new Futhmark design is minted in very small numbers compared to typical coin or commemorative medallion strikings. Only a few thousands of each new design are struck, and they tend to disappear into circulation (or collections) very quickly. With this ambitious program, we hope to set new standards for Heathen community building that others may follow. We hope that this program will provide enough value and prosperity that it fuels other, even more ambitious projects later on. We hope you will join us in nurturing this program.

“The course our city runs is the same towards men and money. She has true and worthy sons. She has fine new gold and ancient silver, Coins untouched with alloys, gold or silver, Each well minted, tested each and ringing clear. Yet we never use them! Others pass from hand to hand, Sorry brass just struck last week and branded with a wretched brand. So with men we know for upright,blameless lives and noble names. These we spurn for men of brass…” -Aristophanes, The Frogs, – 405 B.C.

The Futhmark that started the program! The 2013 Thor Copper Futhmark features a rendition of Marten Eskil Winge’s 1872 painting “Thor’s battle Against the Jotnar.” 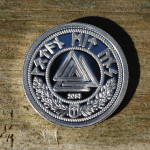 Our first Silver Futhmark. This coin was struck in half an ounce of Pure silver and features the Valknut symbol on the obverse. 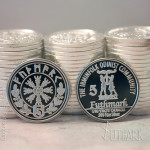 The tenth ounce Futhmark is a convenient and highly popular silver coin. 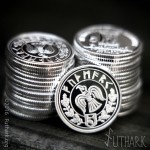