A primer on investing in precious metals

A few years ago, I commissioned a master sword-maker in Europe to make me a Petersen type H, late Migration era “viking” sword.  It was lucky timing that I purchased my sword when I did because that same year, he stopped making custom swords for private individuals and began exclusively selling to museums. But there was another reason the timing was right to buy the sword when I did: the dollar was at the beginning of a steep decline against the Pound and the Euro.

Paul, the swordmaker, had given me the option to pay up front, or to wait until the sword was finished to pay him.  I decided that since I had the cash on me, I’d pay the 800 Great Britain Pounds he quoted me immediately. Then I waited. Every few months he’d call me or write me and ask me to measure the width of my hand, or the distance from my thumb to the floor while standing, or stuff like that. It wasn’t until fully 18 months later that the sword arrived and I was very excited to show it off. My first conversation about the sword went something like this:

At that moment my thoughts went to the safe I had in my bedroom that had been stacked with $20 bills; my version of a bank account since I could find no compelling reason I should give someone else my money for storage. I suddenly realized that the entire previous year of hording my pay from my stockboy job at staples was literally “going bad” like over ripe bananas the longer I sat on it. I had to get rid of these perishable Federal Reserve Notes and quick. I immediately thought of buying precious metals.

I knew nothing at all about investing – nothing – so I made my first investment with only a fraction of my rapidly spoiling fiat currency. I thought I would buy some gold because that’s what I was always hearing about. But Gold was over 500 dollars for each coin! There was a really awesome platinum coin I wanted with a Viking ship on it, but it was even more expensive than gold. I felt that Gold and Platinum were too concentrated a store of wealth. If one day I wanted to sell it, and there was a great depression, who could afford to buy it from me?

Several weeks had passed and I still had not gotten my delivery, but Silver had climbed up to 12.75 an ounce. So I went all in and scraped all but the last bit of decaying greenbacks off their steel shelf and sent them off. This time I bought some bulkier silver bars: a few 10 ouncers and a bunch of 5 ouncers.

By the time I actually received the shipment, the spot price of silver had climbed up to 17 an ounce and then, a few months later, $25 an ounce.

So compelling was the evidence that I had made a good decision hastily, that I went and did the research which I probably should have done in the first place. This is what I gleamed from the experience:

Disclaimer: I am not some finance guru. Your mileage may, and probably will, vary if you decide to take this article as advice. If a mile-wide sterling silver asteroid  falls from the sky and lands on the White House, driving the value of your silver investment down lower than the price of dirt, don’t blame me. This is not advice; just an anecdote about my experience.

There is a huge difference between “coins” and “rounds”, even if they look essentially the same. A coin is a sovereign instrument of debt issued by a Government.  Examples are Silver Eagles, Morgan Dollars, Chinese Pandas, Australian Kookaburras, South African Krugerrands, and Austrian Philharmonics, to name a few. They are not always pure; Often they are alloyed with copper or nickel to make them more durable for circulation. Do a little bit of research on the precious metal content of a “coin” if you are unfamiliar with it. The spot price applies to the precious metal weight only, not the overall weight of the alloyed coin.
“Rounds” are flat round disks of precious metals with pictures on both sides, just like a coin. The only difference is that it is not an instrument of debt – not legal tender. Instead of a dollar amount, it says how pure it is and how much it weighs. They should be stamped something like: one Troy ounce of .999 pure silver.
Of course, precious metals come in bars too. You can get anything from a gram sized Gold bar to a 10 kilo slab of silver and anything in between. 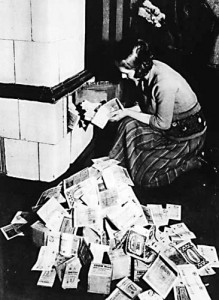 Burning money to keep warm. Imagine how many trillions of marks an ounce of silver could have bought, That’s like a weeks worth of heat!

I invested in silver as a hedge against the end of the world, not as a short term investment. I don’t try to buy silver at such and such price point and then “day trade”.  Silver is a very volatile metal in terms of it’s value. It can drop $10 an ounce in one day or it can ratchet up to $50 just to drop down again. Each time they killed Osama the markets dropped again, then the stark reality that debt is not wealth comes back to haunt wall street and precious metals are high in demand again. I’m sure there’s plenty of room in such a market for smart money witchdoctors to exploit. I don’t do that; I have too many hobbies already. I put all my loose change in a jar and whenever prices “correct” down temporarily, I buy with both fists. All I know is that each time there is a buying opportunity, the prices are higher than the last buying opportunity a few months earlier. As little as 2 years ago you’d be laughed at if you said that silver would hit $80 an ounce, now you can read about these predictions right from wall street.