A furore Normannorum libera nos, “From the fury of the Northmen deliver us.”

Featuring the iconic “viking Raven” design on its obverse, the 2016 5 Futhmark release is styled after the Anlaf Guthfrithson (Óláfr Guðrøðsson) silver coin minted in York in the year 940AD which bore the same Raven design.

The original Raven coin was struck to commemorate his ascension as King of Northumbria,upon the death of Æthelstan,who died in October 939. The Raven “with wings displayed” is believed to have been the King’s War Standard (guðfani), which they called “Raven”. Raven banners were featured on the Standard of several Viking Armies throughout the 9th, 10th, and 11th centuries.

The Germanic symbolism connected to the raven was related to this natural aspect of the bird. Ravens were a symbol of sacrifice, for they were known for “receiving and rejoicing over sacrificial victims.” The raven was associated with Óðinn’s familiars, Huginn and Muninn (Thought and Memory), and thus was “a source of wisdom and prophetic knowledge, most particularly where such knowledge concerned omens of war. The raven could be an “unlucky bird” or a “bird of evil omen” for those doomed to die in battle, while at the same time several Viking leaders were known to bear the sign of the raven upon their banners as a token of victory. In Old English, the raven was known as wælceasega, “chooser of the slain,”and the equivalent term in Old Norse, valkyrja, was used to denote Óðinn’s handmaidens who selected the warriors fated to die, the Valkyries.

This new silver proof piece carries on the Futhmark series with a fresh new design for 2016 and brings the current circulation of the community currency program to 14,500 Futhmarks in issuance to date. 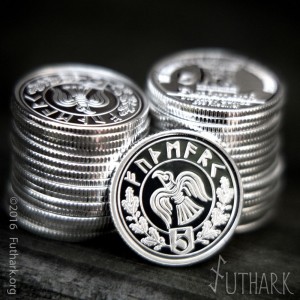 Current issue Futhmarks are available to the general public as collectible medallions by going to futhark.org.