Eyvind Kinrifa, the Death of a Pagan Martyr 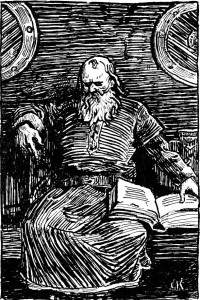 Before I begin I want to clarify that it is not my intention to portray northern European Pagans as helpless and innocent victims of Christianity’s proselytism and religious persecution. Viking raiders sacked churches for revenue and killed or enslaved Christians often enough to warrant a negative reputation, and were far from helpless. My point is that they weren’t doing it to force their religion on other people. Their faith systems tended to be ethnocentric and did not include an imperative to proselytize. They did, however, sometimes absorb ideas from other tribes. European paganism, from early Rome to its last official holdout in 14th century Lithuania, was not always welcoming but was generally more inclusive than monotheism (with some exceptions, such as Rome’s conflict with the Brythonic Druids). One common problem with Christians was their refusal to give what our ancestors considered proper respect to local pagan deities, be they Jupiter, Odin or anyone else.

The fall of the old religion did not happen all at once, and I cannot lay the blame solely on Christian intolerance. From the beginning the monotheists made it clear that they had no room for the other gods. It was the cornerstone of their belief system and everyone else should have realized what that meant. The tolerance of our Pagan ancestors, limited though it may have been, made it possible for the Christians to gain a foothold until they had the numbers to spread their religion through force. In addition to this, some of our own Kings and tribal leaders saw political opportunity in the adoption of Christianity, and their betrayal was the final stage to the conversion of northern Europe to monotheism.

We are forever reminded that history is written by the victors, and theirs is the perspective people are familiar with. For those among us who have returned to the old religion, or anyone seeking deeper knowledge, I would like to share with you the story of Eyvind Kinrifa’s Death, from the King Olaf Trygvason’s Saga in Snorri Sturluson’s Heimskringla. If any man could be called a Pagan martyr, it would be him.

“Then Eyvindr was brought to see King Óláfr. The king commanded him to be baptized like other people. Eyvindr refused. The king commanded him to accept Christianity with fine words, and gave him many good reasons for it, as did the bishop. But Eyvindr would not consent. Then the king offered him gifts and great properties, but Eyvindr refused everything. So the king threatened him with torture, injury or death. But Eyvindr would not consent. Then the king had a bowl full of hot embers brought in and set on Eyvindr’s stomach and soon his stomach burst into pieces. Then Eyvindr said: ‘Take this bowl off me. I wish to say something before I die.’ And so it was done. Then the king asked him, ‘Eyvindr, will you now believe in Christ?’ ‘No,’ said he, ‘I cannot receive baptism. I am a spirit given life in human form by Sami magic, for my father and mother were unable to have children otherwise.’ Then Eyvindr died and had been the most versed in magic of men.”   Heimskringla: Óláfs Saga Tryggvasonar, by Snorri Sturluson. Translation from Nordic Religions in the Viking age, by Thomas. A. DuBois pages 3,4.

In his attempt to convert Eyvind, King Olaf first attempted to sway him with good reasons. Previous leaders who accepted baptism were usually offered the friendship and support of the king. Failing to win his loyalty with political influence, Olaf appeals to greed and offers him gifts and land. When this also fails he tried to use Eyvind’s fear against him, and threatens to torture and kill him, but to no avail. King Olaf then tortures Eyvind Kinrifa to death, and has the arrogance to ask him once again to convert right before he dies. King Olaf was not looking for true conversion, but the suppression of any opposition to his rule and the spread of Christianity. Knowing this, one might find it acceptable to be insincere, say whatever was necessary to survive, and plot against the king from within the new hierarchy; a Machiavellian but very logical approach to the situation. Honor seems straightforward but in reality can be very subjective. Eyvind’s choice was dying for his honesty or surviving as an oath-breaker to continue to serve and fight for his gods, making him useful but stained. His situation could be compared to the term zugzwang in a game of chess, where any move is detrimental, but you must make a move. Eyvind’s choice was to die with honor much like a martyred Christian saint.

The pro-Christian Heimskringla was written by the same man who recorded the Prose Edda, Snorri Sturluson. Some people very new to Odinism might wonder why that is. Much of our ancestor’s lore was recorded through oral tradition, hence the format of the sagas. Oral tradition is not the best way to preserve information, especially when it is being forcefully suppressed. Ironically, the Eddas and other sagas that remain were largely recorded by Christian scholars or Monks, but are only a sample of what was. Christianity often absorbed characteristics of pagan religions that were deemed compatible or useful to help control the new converts. Many feel that Snorri Sturluson’s recording of the Prose Edda was purposely done in a way to promote Christian values that already existed within the ancient worldview, and that he and other scholars filtered or censored anything that the Church might disapprove of. This could explain why we have little information about powerful deities such as Freya, even though their popularity and importance are clear from the poems.

There are other academics that strongly disagree with the idea that Snorri was a theological propagandist. They point out that the Eddas contain many examples of pre-Christian thought and values, and that Snorri was as objective in his Heimskringla as he could be expected to be. Their opinion is not unreasonable, the Heimskringla does cast some Christians in a disparaging light and not all pagans are vilified. We also need to remember that deviating too far from Church doctrine at the time, especially for intellectuals, could end badly. I don’t know the truth about Snorri’s intentions, but I am thankful that Christians recorded as much of the old lore as they did. If the Eddas were a doorway through which our ancestors could be introduced to Christianity, they may be also used as a doorway to explore our past.

The translation I used of Eyvind Kinrifa’s Death was from the book Nordic Religions in the Viking Age by Thomas. A. DuBois, and for several reasons I feel it is the most accurate. There are other English translations that make me suspicious. They seem to take liberties to further demonize the old religion. I am not a linguist, but I did my best to investigate. When Eyvind Kinrifa finally explains why he cannot convert he states “Ek em einn andi,” which is translated from Old Norse as “I am a ghost” or “I am a spirit.” Many English translations instead have him saying “I am an evil spirit,” although there was no indication of the spirit’s nature in the original text. The word evil did not have a counterpart in the original sentence and the term andi seems to be a general term for spirit that some references say can be either good or evil. Nothing I have found on the term andi conveys a specifically evil nature. It has three definitions: spirit, ethos, or breath. The English word spirit is taken from Latin word spiritus which also means breath, and is used in a very similar way to all three definitions of andi. While some of the English translations I read included the adjective evil in that sentence, the translations of Eyvind’s statement that I found in German and Russian both translate “Ek em einn andi” as “I am a spirit,” and more accurately match the translation provided by DuBois.

The reason this detail is important is not just a matter of accuracy, the insertion of the word evil into Eyvind’s statement completely alters the implied meaning. Eyvind’s refusal to deny his beliefs could be based on honesty and honor, even in the face of death; but when the word evil precedes the word spirit it leads us to think that he is a demon incapable of swearing allegiance to the Christian God, even to save himself. 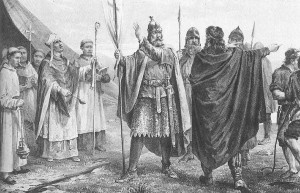 Despite the various interpretations of his work and theological agenda, Snorri Sturluson does not appear to sanitize his descriptions of King Olaf Tryggvasonar. Although being portrayed as a Christian hero in the Heimskringla, he could just as easily be seen as a murderous villain. The death of Eyvind Kinrifa was not the only incident. King Olaf was well known for his violence and forced conversions. Another man, named Eyvind Kelda, was called a great sorcerer, which was how the Christians would refer to any pagan shaman at the time. King Olaf ordered an area searched for all practitioners of pagan magic and had them brought to a meeting. He served them a great feast and strong drink. When they were intoxicated he had his men set the house on fire so that the warlocks would all be burned alive. Eyvind Kelda escaped through the smoke hole in the roof. Olaf later tracked him down and killed him too. There was also Raud the Strong, who was very wealthy and had many followers, including Finns, to call on when in need. After King Olaf stormed Raud’s home, he offered mercy to him if he converted to Christianity. Raud refused and was horribly tortured to death, as were any captives who also refused. The King then confiscated Raud’s wealth and his ship. History has many heroes and villains; and sometimes they can be the same person. Which one they are depends on where you are standing at the time.

Most Christians today would not condone the atrocities of King Olaf; some have even taken tolerance to unhealthy extremes. Moreover, modern Odinists are not planning on raiding coastlines or sacking monasteries. So why examine the Heimskringla and the conflicts of our ancestors?

The past, as many before me have said, is the key to understanding the present and a tool for shaping the future. Through the Odinist concept of Wyrd, we come to understand that all that exists is a reflection of what was before, and through wisdom and observation we can use our knowledge of the past and present to glimpse what is to come. The Christians have their past, but ours is not as well known. Our lore and our heroes deserve to be remembered as well.

Nordic Religions in the Viking Age, by Thomas A. DuBois

Heimskringla, The Chronicle of the Kings of Norway by Snorri Sturlason
ebook provided by Project Gutenberg, Produced by Douglas B. Killings, and David Widger
http://www.gutenberg.org/ebooks/598