The Irminfolk is a tax-exempt religious organization that is incorporated under the laws of New York State and is a Federally recognized 501(c)3 organization.

The Irminfolk serves as a philosophical, educational, religious, and social community of Folkish Heathens. We provide for a community of people from a broad spectrum of society in a family friendly environment.

Through the promotion of social gatherings, Asatru rites and rituals, museum outings, group hikes, Rune/Lore studies, community service projects,  and regular meetups, our members and leadership strive to make the Irminfolk a visionary, professional, and cultured organizational and inspirational vehicle for our Folk.

We believe that this concept was strongly embodied in the Pre-Christian religions of our European ancestry.  We strive then to motivate our Folk to to find that communion with their distant ancestors and to find their own link in that never-ending chain between the distant past and the far flung future. We do this by reconstructing, as best as we can from documents and evidence from long-ago, the ways our ancient European ancestors honored the Gods of the European Pantheon. We celebrate the holidays of our ancient ancestors without the Christian tinseling that veils their Pagan origins. We attempt to practice the rites and and ceremonies in the manner they did.

The Irminfolk’s Core Pantheon is the Gods and Goddesses of the Aesir and the Vanir – The Norse/Germanic Pantheon. This belief is commonly known as Asatru.  Additionally, we are an Odinist Community, believing that Odin is the chief godhead.

Branching further from the Sacred Pillar of Central Europe we embrace our Cousins to the South, of Greece-Roman Heathenry, and to the East, The Slavonic Gods like Swentowit and Perun. We recognize the ancestral Gods and Goddesses of our European cousins with tolerance, understanding and friendship.

But the Irminfolk are not pedantic reenactors foppishly miming the distant past and forgotten words like eccentrics in a living history exhibit. Though the old aesthetics of Europe inspire our creativity, we feel it is entirely out of harmony with the spirit of our age to keep harping on that far-off and forgotten nomenclature which belongs to the ancient Germanic times and does not awaken any distinct association in our current age. For us, Odinism is alive within us, and the most important feature is the folk-spirit those ancient ways inspired. The ancient folkways of our forebears are not merely a hobby, and focusing too much on academic reconstruction fundamentally derails the living, upward path Asatru exists for.  To us, it is an entire worldview that is captured in the essence of these traditions. That essence, that divine spark, is what guides us in this path.

So, we will not venture into the Talmudic quibbling and historical debates that sometimes govern other groups, and distract them from the task religion exists for; to serve as the inspirational and organizational instrument around which the folk is centered. We are free to develop new celebrations, and new traditions that we create in the spirit and shadow of our ancestors; but most importantly to the promotion of the Folk-consciousness. We are not bound to the exact fashion of a time period of this or that person’s life. Ours is a quest to re-discover our ancestral path – and to ascend the upward path.

The Irminfolk is not affiliated with any political movements or parties and does not subscribe to any political ideologies or initiatives. Individual members may and do hold their respective beliefs and affiliations. The beliefs, affiliations, words, and actions of an individual member acting in his own capacity does not reflect those of The Irminfolk or upon other members.

Radical politics is not a concern of Asatru one way or the other. Neither left nor right wing extremism are relevant to our mission, and both are generally associated with socially maladaptive behavior.  While the Irminfolk uphold that everyone is entitled to his or her wrong opinion, as soon as that opinion manifests in problems for us, it becomes a disciplinary issue.

For those wishing to become involved with the Irminfolk, there are two general courses of action available to them depending on where you live.

The first step is to get in touch with us. Messaging our facebook page is a fast and easy way to get in touch.
If you live in close enough proximity to the Northeast Pennsylvania / Upper Delaware Valley area of the northeast United States, you can arrange to meet with us to discuss becoming a member of our kindred. Usually this first “moot” takes the form of a hike, museum outing or other physical or cultural activity.  Additionally, there are an open-to-the-public Irminfolk events throughout the year which a prospective member may wish to avail himself to.

The Irminfolk Auxiliary program for members wherever they may live. 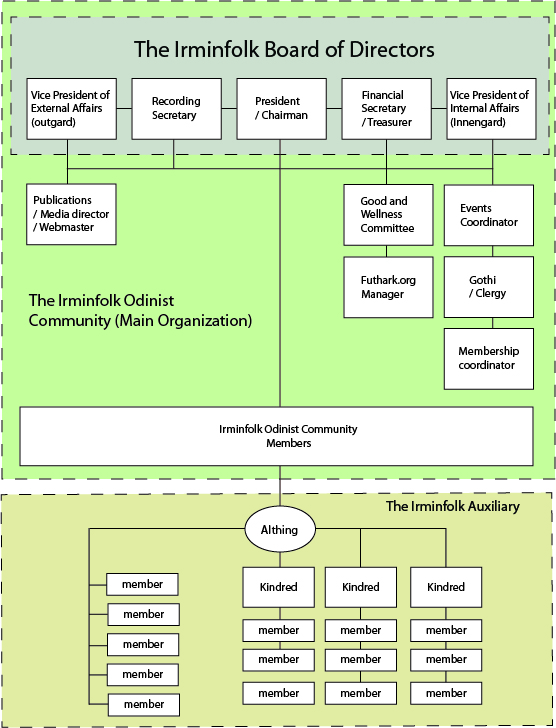 There are two general categories of membership in the Irminfolk, The Irminfolk Odinist Community, which is a Folkish kindred headquartered in the Upper Delaware Valley of New York State; and the Irminfolk Auxiliary, which is a more nebulous arrangement for people who support our mission but are not in close proximity.

Both the Community and the Auxiliary are directed by the board of Directors which provides the overall planning and coordination of all of the Irminfolk’s programs. There are five Director positions:  The president, two vice presidents (one for innengard, and one for utgard), a recording secretary, and a financial secretary. They work together with the voting (oathed) members of the Irminfolk to provide the smooth businesslike operation which facilitates the religious purpose of the Irminfolk’s mission.

Four times a year, the Board conducts a formal meeting -governed by the rules of deliberative assembly- to assess the overall organization’s progress; to plan, debate and agree upon new initiatives; and to review the documentation of the groups finances and status in a transparent manner. Additionally, throughout the year, the board and members meet informally to steer the course of the Irminfolk’s day-to-day running. Generally speaking, routine decisions are left up to informal discretion, and innovations are hashed out between board meetings and then formally proposed before the assembly to be debated, and voted upon.