This part of the course will focus on Topographic map reading and attempt to empower the user with a better understanding of the legend, map color conventions, contour lines, terrain features, grid systems, grid lines, declination and map scale.  With a better comprehension of these map conventions, the use of topographic maps in Land Navigation will provide greater accuracy in plotting courses, identifying terrain features,

Colors on a map. 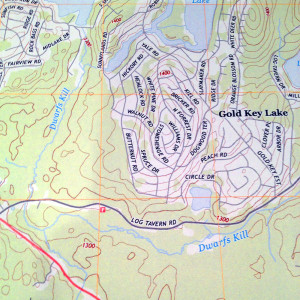 By about the fifteenth century, most European maps were carefully colored. Profile drawings of mountains and hills were shown in brown, rivers and lakes in blue, vegetation in green, roads in yellow, and special information in red (“X marks the spot”.) A look at the legend of a modern map confirms that the use of colors has not changed much over the past several hundred years. To facilitate the identification of features on a map, the topographical and cultural information is usually printed in different colors. These colors vary from map to map.

Most standard large-scale topographic maps will use the colors to represent features as shown here: 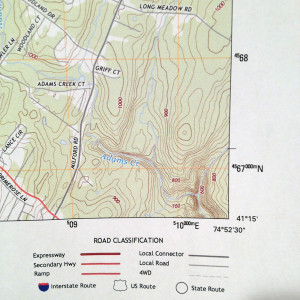 Around the perimeter of any map quad are strings of Numbers running all the way around the grid. These numbers represent the two types of Grid systems represented on the map. The exact Latitude and Longitude is represented at the four corners of the map, and then are graduated at equal intervals along the edge. The second set of numbers, usually represented in Bold, and a smaller type, is the Universal Transverse Mercator (UTM) grid coordinate system.

The MGRS grid system is the standard we use in the Irminfyrd. It is the standard favored by NATO, Scientists, Surveyors, Researchers, and Emergency services which uses Meters and Kilometers rather than degrees and Miles. The MGRS is derived from the Universal Transverse Mercator (UTM) grid system and the universal polar stereographic (UPS) grid system, but uses a slightly different labeling convention. The MGRS is used for the entire earth.

A complete example of an MGRS Coordinate would be 18TVM96710749 (the precise location of the Irminfolk’s Sumbel Pavilion often used during this part of this courses’ instruction.) It consists of three parts. They are shaded in different colors here only to help with the courses’ instruction.

18T is the Grid Zone Designator, VM is the 100,000 square meter identifier and 96710749  is the numerical location expressed in Eastings 9671, and Northings 0749, in this case specifying a location within 10 meters of resolution.

The Grid Zone Designator (GZD) is a 6° wide UTM zone numbered 1-60 which is intersected by latitude bands usually 8° high lettered C-X (omitting the I and the O).

The third part of an MGRS coordinate is the numerical location within a 100,000 meter square.  If a coordinate representing a 10 meter square is measured, such as the example given 96710749, a four digit + four digit number is used. This resolution is sufficient for most tasks and is standard for NATO coordinate specification. The first 4 digits give the easting in meters, measured from the left edge of the square, and the last 4 digits give the northing in meters, measured from the bottom edge of the square. If  1 meter of precision is needed, then a coordinate consisting of a 5 digit easting + a 5 digit northing is used (9671307499).

Declination: North, North and North are not the same. 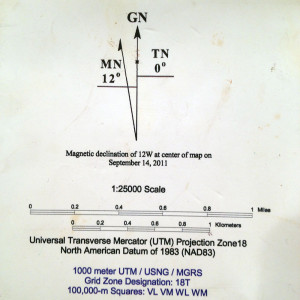 Declination is the difference, expressed in degrees, between two Norths. When using a map and a magnetic compass for Navigation the declination that is of most importance is that between the Magnetic North, and the Grid North. That is, the North that the compass’ dial is pointing to, compared to the vertical lines drawn on the map.

There is usually an angular difference between Grid north and Magnetic north. since the location of the Magnetic North Pole does not correspond exactly with the Grid north lines on maps, a conversion from magnetic to grid or vice versa is needed.

The declination for every map is shown on the bottom of the mapsheet.

For example, if you aim your compass at a distant point, and the compass reading you get is 190 degrees (the Magnetic Azmuth), and the declination diagram on your map tells you that the Grid/Magnetic angle is -12° (westerly), then you would subtract the declination from the Magnetic reading. 190 – 12 = 178. Your Grid Azmuth is 178°.

If your map specifies that the declination is Easterly (eg. plus 12°), then add this number to the Magnetic Azmuth to get your Grid Azmuth.

Terrain features on a topographic map.

Hill. A hill is an area of high ground. From a hilltop, the ground slopes down in all directions. A hill is shown on a map by contour lines forming concentric circles. The inside closed circle is the hilltop.

Valley. A valley is a stretched-out groove in the land, usually formed by streams or rivers. A valley begins with high ground on three sides, and usually has a course of running water through it. If standing in a valley, three directions offer high ground, while the fourth direction offers low ground. Depending on its size and where a person is standing, it may not be obvious that there is high ground in the third direction, but water flows from higher to lower ground. Contour lines forming a valley are either U-shaped or V-shaped. To determine the direction water is flowing, look at the contour lines. The closed end of the contour line (U or V) always points upstream or toward high ground.

Ridge. A ridge is a sloping line of high ground. If you are standing on the centerline of a ridge, you will normally have low ground in three directions and high ground in one direction with varying degrees of slope. If you cross a ridge at right angles, you will climb steeply to the crest and then descend steeply to the base. When you move along the path of the ridge, depending on the geographic location, there may be either an almost unnoticeable slope or a very obvious incline. Contour lines forming a ridge tend to be U-shaped or V-shaped. The closed end of the contour line points away from high ground.

Depression. A depression is a low point in the ground or a sinkhole. It could be described as an area of low ground surrounded by higher ground in all directions, or simply a hole in the ground. Usually only depressions that are equal to or greater than the contour interval will be shown. On maps, depressions are represented by closed contour lines that have tick marks pointing toward low ground.

Cliff. A cliff is a vertical or near vertical feature; it is an abrupt change of the land. When a slope is so steep that the contour lines converge into one “carrying” contour of contours, this last contour line has tick marks pointing toward low ground. Cliffs are also shown by contour lines very close together and, in some instances, touching each other. 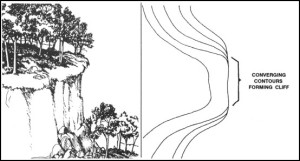