The Gift Cycle, How Irminfolk Auxiliary membership can help the community at large

The Irminfolk Auxiliary is a donor-based member program designed to enhance our commitment to the propagation of native European Spirituality and to the development of formal and informal kindred affiliations beyond our immediate local area. By joining the Irminfolk Auxiliary you contribute to supporting the Irminfolk’s mission from wherever you may live. It provides an opportunity to be a part of a powerful, competent, professional structure and to network with other similarly oriented folkish heathens who, due to geographical location or other commitments, may not have the ability to participate directly in the primary Irminfolk Community activities.

Over the years, many people have expressed interest in joining the Irminfolk, or just wanted to find ways they could help out. Many people reach out to us seeking advice on best practices for their local kindred, or how they can incorporate some of our programs and features into their local initiatives. But the Irminfolk was only able to provide limited help to them because of the small geographical area our Kindred resides in. This Auxiliary program is an answer to that.

The Irminfolk provides Asatru kindred building and administration instruction; It provides and facilitates Asatru spiritual development; supports wholesome activities such as hikes, campouts and challenges; commissions and distributes awards, medals, and heraldry; facilitates the sharing of resources, and the establishment of settings where supportive friendships can form; and it facilitates both formal and informal opportunities for networking, trade and frith. Your sponsorship can help these initiatives grow.

As the program develops and grows, more formal systems of representation will begin to take shape, allowing individual members and affiliated kindreds to engage directly in the decision making process. We will strive to ensure that every voice and opinion is heard but that only those who persuade the majority will govern.

You can join by obtaining a membership packet through our official webstore, or directly from one of our vendors. Your sponsoring membership is a tax deductible donation. Auxiliary membership is available to any individual who accepts the principles and beliefs of the Irminfolk Odinist Community, pays the membership fee, and is 18 years of age or older.

As an auxiliary member, you will:

501(c)3. The Irminfolk is a legally recognized tax exempt nonprofit organization. All donations, including membership due, are tax deductible, minus the value of any gifts received.

Your membership begins the moment your charitable donation is accepted, and all annual auxiliary memberships expire upon the New year.

Membership in the Irminfolk Auxiliary may be terminated for any reason and at any time if the Irminfolk Board of Directors decides that your continued association would be harmful to the interests of the Irminfolk. 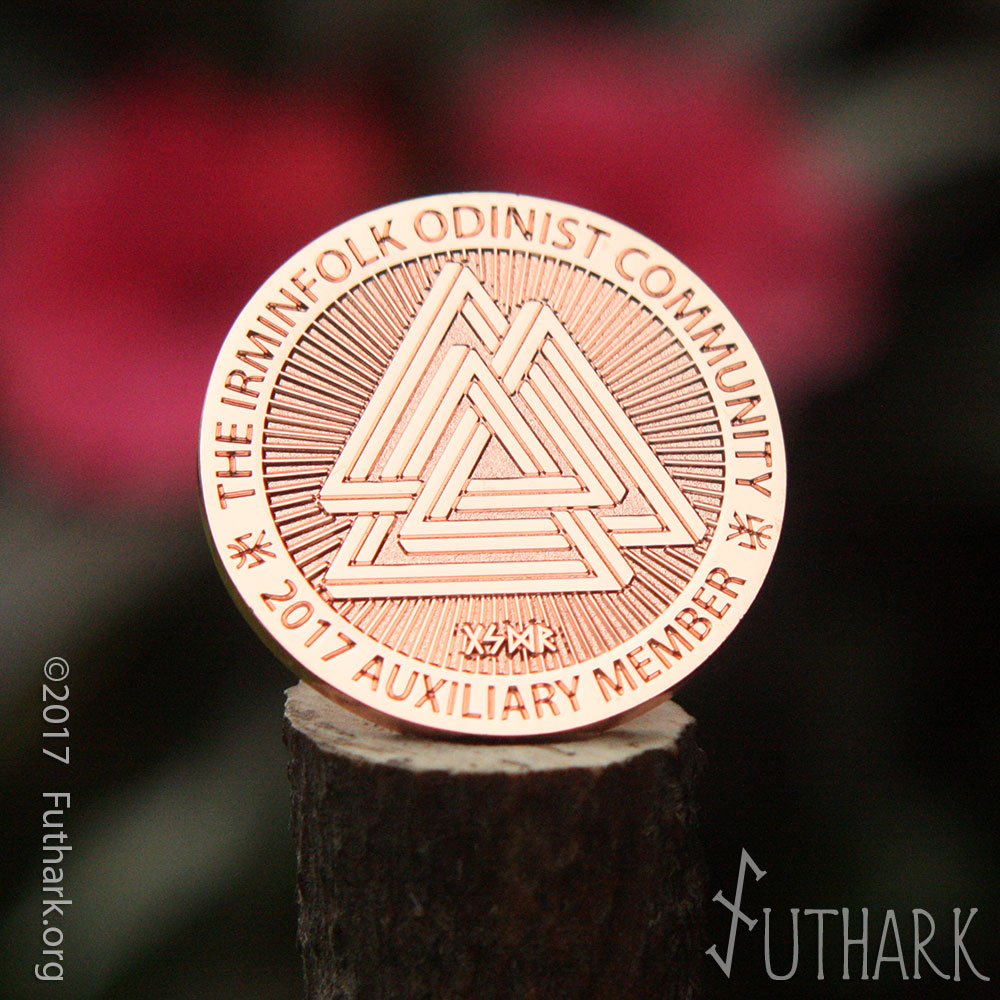 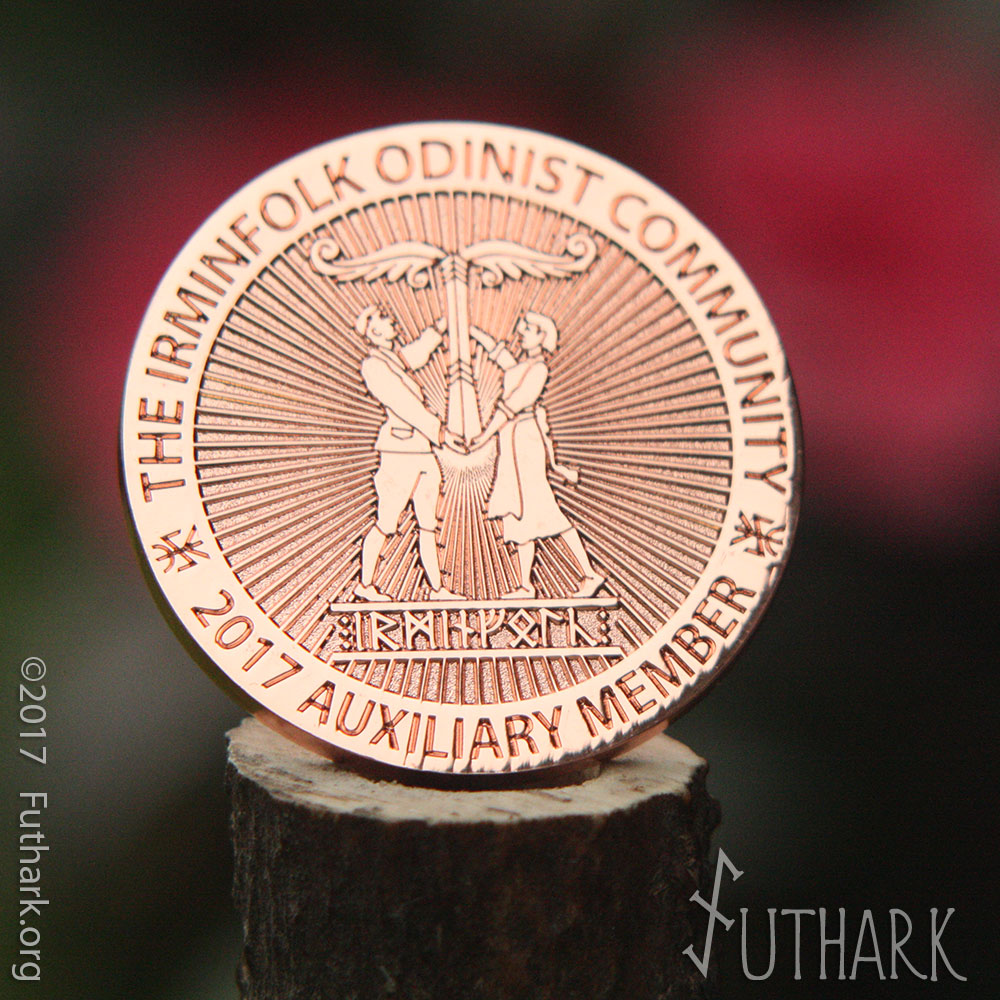 This is the most basic membership level in the Irminfolk Auxiliary program. For a tax-deductable, charitable donation of $25.00, you become a copper member of the Irminfolk Auxiliary.  You receive your medallion indicating membership, you will be eligible to be added to the Irminfolk’s social media channel where a variety of programs will be discussed and disseminated, challenges issued, and where you can network with one of the most affluent goal-oriented Asatru groups around.

What your Copper membership makes possible:

Your contribution helps the Irminfolk with the day to day running. The costs of incidental things like postage and web hosting add up. This level of your sponsorship helps us maintain a mission ready community. 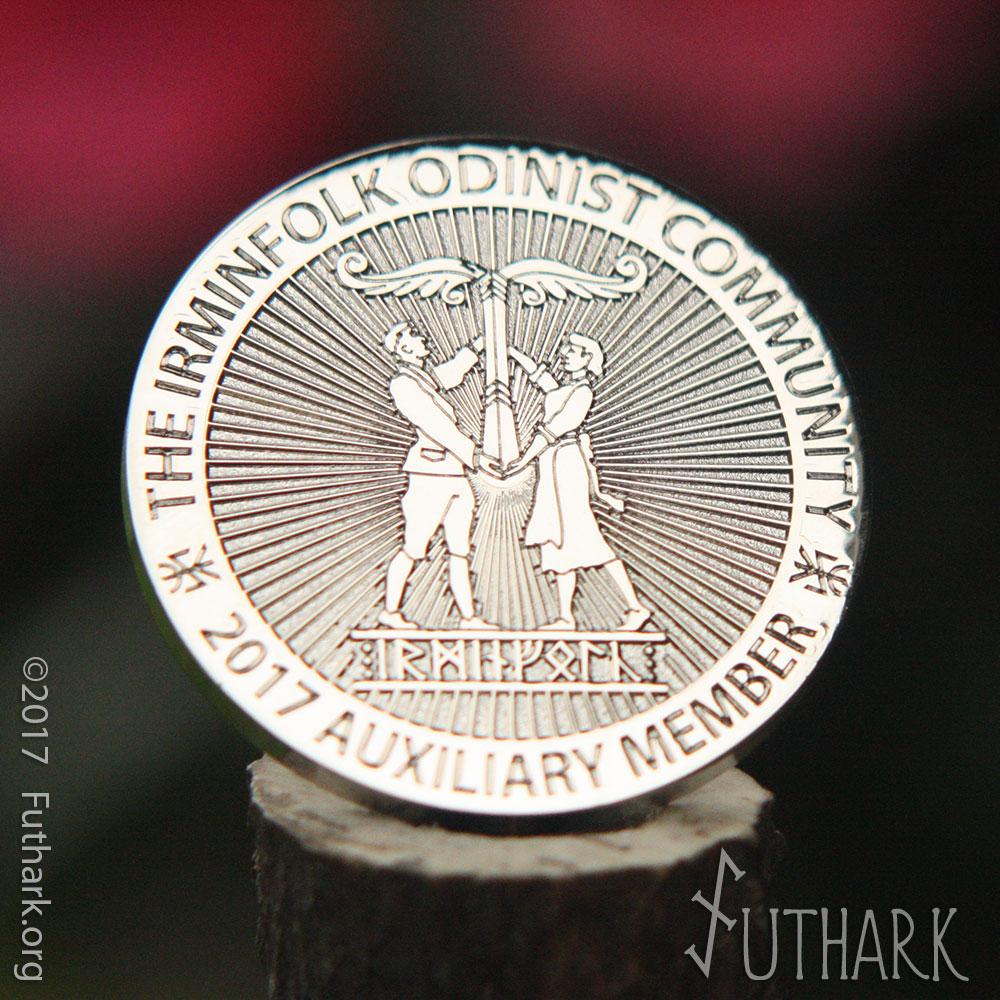 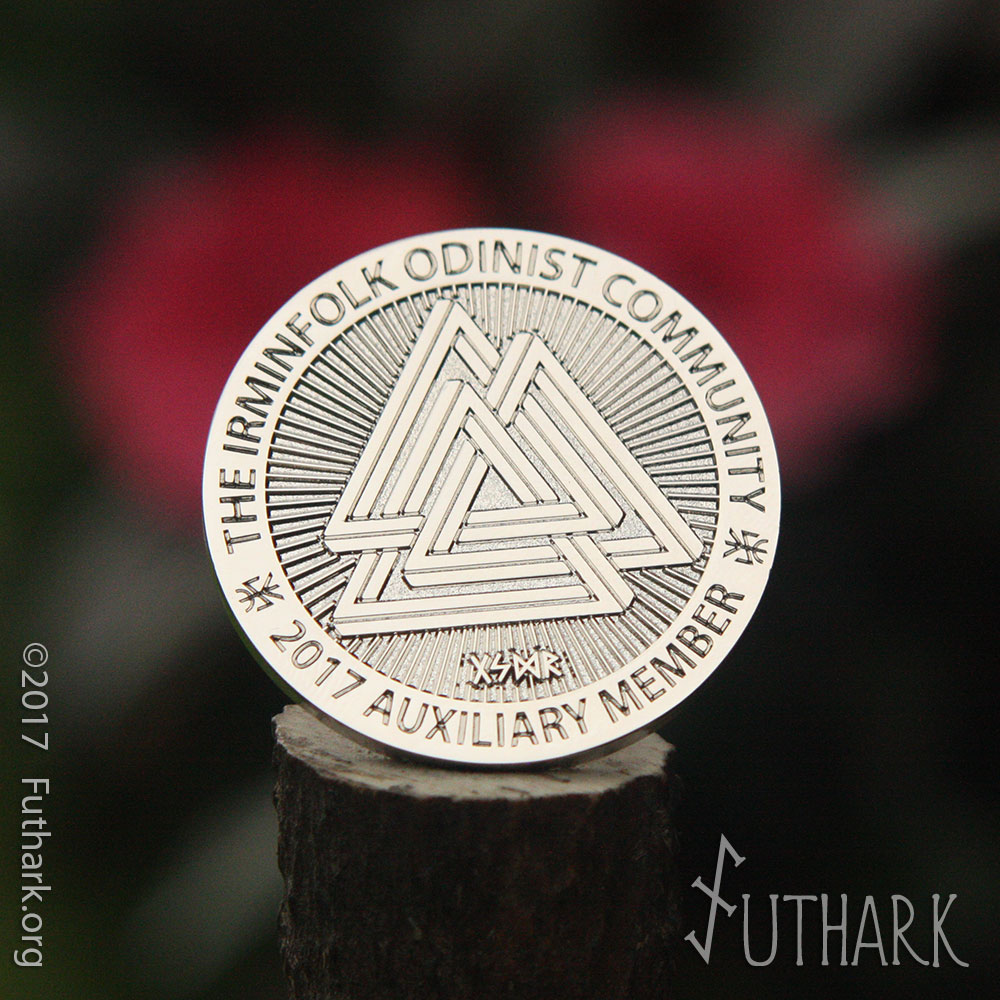 As a silver member of the Irminfolk auxiliary your tax-deductable charitable donation of $100.00 you will receive the appropriate medallion indicating your status, as well as a patch with the Irminfolk’s logo. You will be eligible to be added to the Irminfolk’s social media channel where a variety of programs will be discussed and disseminated, challenges issued, and strategies planned.

What your Silver membership makes possible: 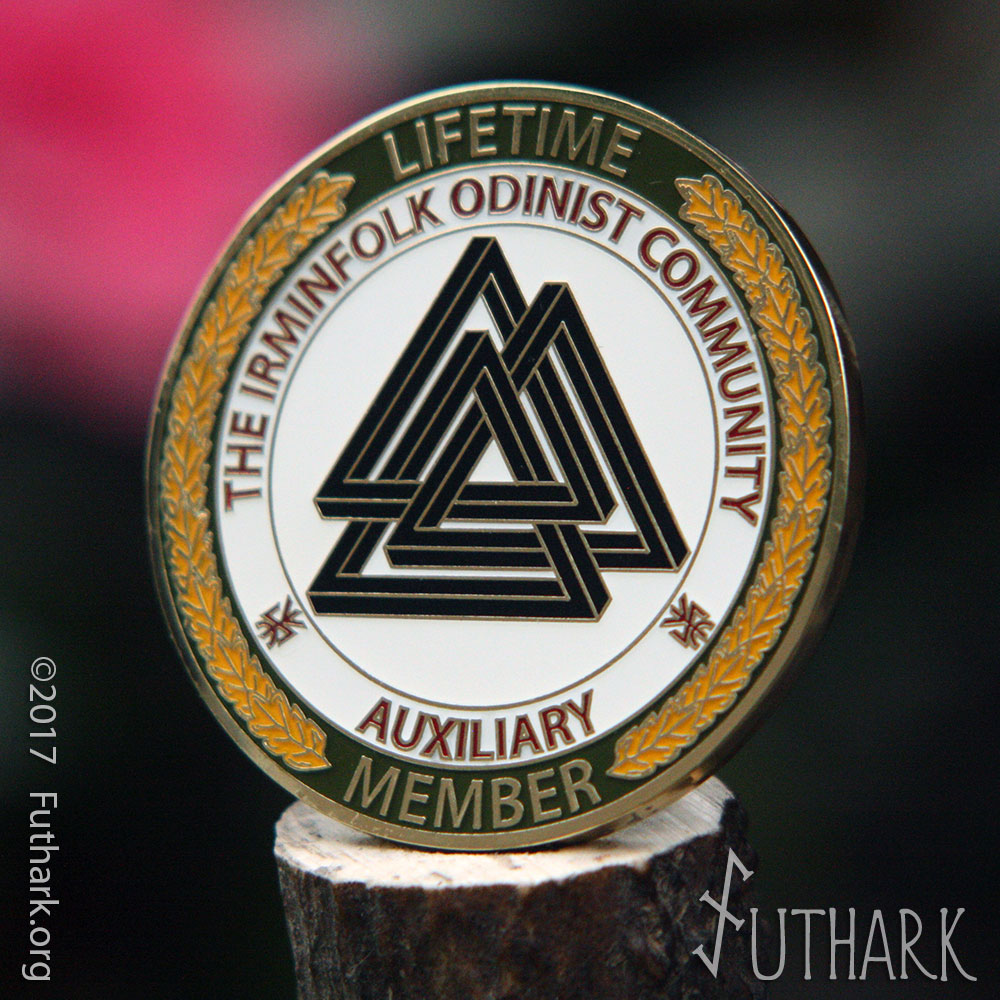 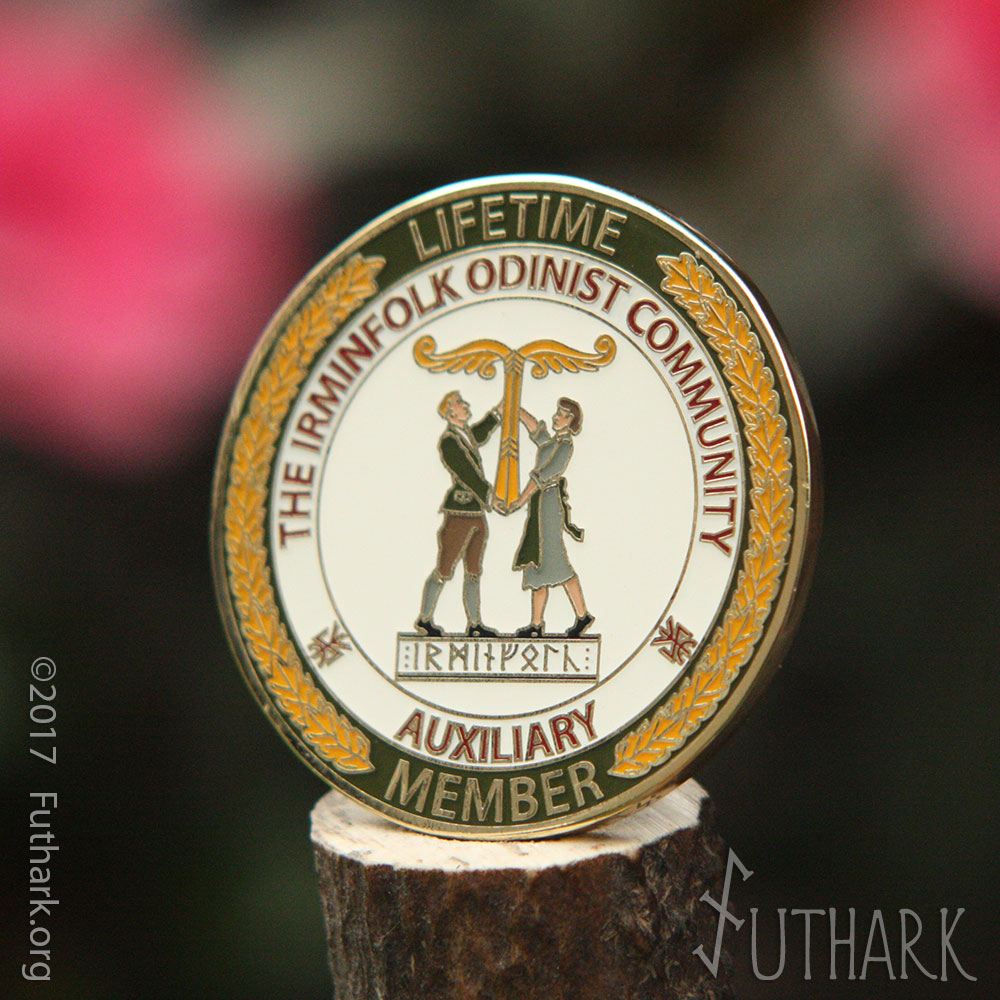 Where we have a number of auxiliary members living close enough to one another to actively collaborate and form a formal or informal kindred, they may choose to enroll in the Irminfolk’s kindred development program. To be eligible for enrollment in the kindred Development program, a kindred must maintain at least 4 members in the Irminfolk Auxiliary program, with at least one of those members being a lifetime member (or the group can obtain the lifetime membership medallion in the name of the kindred as a “corporation”).

As an affiliated kindred, the kindred will receive:

A custom kindred Flag designed with the assistance of industry professional graphic designers.
A streamer for the organization flag.
Access to leadership education training, organizations training, and sample “best practices” manuals for organizing a kindred.
Members of the auxiliary kindreds will be eligible to be awarded many of the medals, 0rders and decorations of the Irminfolk Odinist Community, such as the Algiz Rune in Honor of the Heathen Mother, the sport badge, and the long service ribbons.
Auxiliary kindreds will be eligible to receive special Futhmark distribution packets to begin using the Futhmark currency program within their own local community.

Q: Is there a conflict of interest between my Kindred and the Irminfolk Auxiliary?

A: No, there shouldn’t be. The Irminfolk does not wish to “play Rome” and influence your local affairs.  You can choose what level of activity you or your kindred wishes to partake in regarding what we offer. Your personal and kindred prerogatives govern. We are just offering a framework. In any conflict of interest between your status as an Irminfolk Auxiliary member and your local kindred or your family, we recommend you place your loyalty with your own first! Each Kindred or individual tailors its own interaction with the Irminfolk Auxiliary, though we will offer our recommended best practices guidelines to help us all grow together.

If you are a member of another organization, there should be no problem also contributing to – and receiving benefit from – the Irminfolk Auxiliary program as we do not ask for any oath from the individual in order to sponsor our programs.

The issuance of a membership medallion bestows no permanent right to membership. The membership status and privilege of any Auxiliary member can be revoked by the Irminfolk Board of Directors at any time if a member fails to remain in good standing, or for any other reason. Among the more common reasons for which a membership might be revoked are: